Author’s Note: This article arises from work by Eric Olson, member of the Greater Seattle Aquarium Society, and founder of the web site “The Krib”. It is a summary, analysis, and interpretation of data compiled by Eric and presented in his article Lighting Level: What’s ideal?, which is located at the web site address http://www.thekrib.com/Plants/Tech/Lighting/.

In the last decade there has been a move in the North American aquarium hobby to create display aquaria with considerably lusher, thicker, more vibrant plant growth than was ever seen before. This movement followed a similar trend in northwestern Europe in the previous decade, and resulted largely from the publication of the English language edition of the book The Optimum Aquarium in 1986 [1].

A fundamental aspect of this change is the move to much higher aquarium lighting levels than were previously seen. Debate continues as to what is the optimal light level for aquatic plant growth.

To help answer this question, Eric Olson conducted an Internet survey of freshwater plant enthusiasts in 1998 [2]. He asked each hobbyist how much lighting and of which type was being supplied to his or her planted aquaria. He also examined publications by Amano and extracted light level information from them. Amano is a professional aquarist who has developed and published methods for establishing “natural” aquaria based on scientific methods [3].

The results are plotted in figures one and two, where the wattage of fluorescent/metal halide lighting is plotted as a function of tank capacity for Amano’s tanks (Figure 1) and for Internet hobbyists’ tanks (Figure 2).

Eric finds that the commonly used “watts per unit tank volume” rules do not apply well to tanks set up by Amano. Instead, he shows that Amano’s tanks are better described by a parameter that he calls “watts per estimated surface area”, where estimated surface area is tank volume to the 2/3 power. He uses this parameter since the actual surface areas of the tanks were not always provided. The lighting in Amano’s tanks is found to be reasonably well bounded by this parameter within the range of 200W/m2 to 800 W/m2. The low, medium, and high range of lighting levels of “Amano style” tanks are shown in table 1.

Let’s compare these results to my own aquarium. It was constructed to the imperial measurements of 48″ long X 24″ high X 24″ wide. The volume of the tank is therefore 453 liters (or 0.453 m3). Volume to the 2/3 power is therefore 0.590 m2. The tank is illuminated by 300 watts of fluorescent lighting, so the “watts per estimated surface area” value for my tank is 509 W/m2, or just slightly more than average for an Amano tank. However, the actual surface area is 0.743 m2, not 0.590 m2 as per the Olson estimate. The number of watts per actual surface area value of my tank is therefore only 403 W/m2. But even this corrected value is about average when compared to the Amano tanks.

Figure 1: Lighting in Amano’s planted aquaria. The lines for “Watts per approximate surface area” in W/m2 are superimposed for the high value of 800 W/m2, a medium value of 400 W/m2, and the low value of 200 W/m2. Note that the data clearly do not follow a linear relationship between watts and liters. If a linear relationship existed the points would fall along a line with a (higher than observed) 45º slope in this log/log graph. As the points fall along a line with a slope of about 30º, a relationship of watts over volume to the 2/3 power is suggested. From Olson [2] 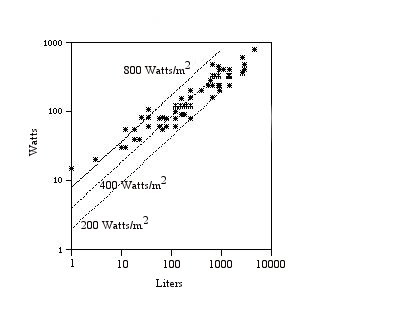 But how do commercial aquarium hoods compare to an Amano tank? Very poorly as it turns out. This comes as no surprise to anyone who has tried to grow plants under commercial aquarium hoods, but it is still quite surprising by how far they come up short. For example, the typical hood for a 36″ long X 18″ high X 12″ wide (127 liter) tank holds a single 20-watt fluorescent bulb. This results in a watts per estimated surface area value of 79 W/m2, and a watts per actual surface area value of 72 W/m2, or about 1/3 of the low end of Amano’s tanks.

The hobbyist’s who responded to Eric’s Internet survey do however seem to set things up a little differently. As was noticed by Ronald Wozniak [4] in the Internet discussion that followed the publication of Eric’s article, the survey shows that the responding hobbyists set up tanks with a fairly linear relationship between light wattage and tank volume; as opposed to the “tank volume to the 2/3 power” relationship of Amano’s tanks. Most Internet hobbyists use between 0.5 W/L and 1.0 W/L. The range is however fairly broad, with some successful hobbyists having more than 2 W/L, while others as low as 0.25 W/L.

It is probable that the hobbyist’s tendency to follow a linear “watts per unit volume” rule is completely artificial: they follow that rule simply because they were told to. But we can see that following this rule would tend to under-illuminate tanks smaller than 50 liters, and provide more light than necessary for tanks larger than 500 liters, when compared to Amano’s tanks.

Lighting in the planted aquaria of hobbyists who responded to the 1998 Internet Survey. Although there is a great deal of scatter, the data approximately follow a linear watts per liter relationship, with a value between 0.5 W/L and 1.0W/L. A linear relationship appears as a line with a 45º slope in a log/log graph such as this one. From Olson [2] 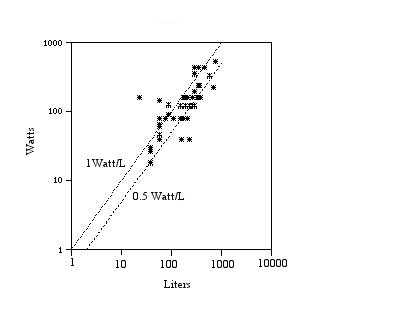 It is unclear from whom the watts per unit volume rule originated, although Karen Randall, writing in Aquarium Fish Magazine, was an early proponent of it [5]. But from a purely bio-physical standpoint, the Amano “watts per surface area” rule makes more sense. As I have discussed previously [6], the notion that deeper tanks need more light is largely a fallacy. This is because water-filled aquaria act as effective “light pipes” – think of them as big, square optical fibers. Aquaria therefore transfer light efficiently to their bottoms without significant “transmission loss” on the way down. Since volume is surface area times depth, and depth doesn’t matter (that much), lighting should be relegated to the aquarium based on its surface area and not its volume.

Nevertheless, determining a tank’s surface area (either estimated or actual) takes more arithmetic than I can do in my head. And I suspect this is true for most people as well. The watts per unit volume rule is a lot easier to apply, since you buy tanks by their volume and lights by the watt and I can handle a simple division in my head. So I would still recommend using the rule 0.5 W/L to 1.0 W/L for moderate sized tanks, with the recognition that for smaller tanks less than 50 liters you may need more than that and for tanks larger than 500 liters you can get by with significantly less.

It is clear from the above comparisons that tanks that use pet-store quality commercial hoods are severely under illuminated. But is it possible to over illuminate a tank?

The evidence compiled by Eric would indicate that it is not possible to over-illuminate a tank unless you want to spend big bucks in an attempt to do so…you simply can’t do it economically and so aren’t likely to do it accidentally. The budget minded aquarist will likely illuminate a tank using dual bulb, four-foot fluorescent strip lights. These fixtures hold two 40-watt fluorescent tubes and are four feet long and five inches wide. The “watts per actual surface area” of this fixture is therefore 516 W/m2. So even if you completely cover the surface of an aquarium with strip lights you will still be only in the high-middle of the range of illumination of Amano tanks.

To get more light than that it would be necessary to purchase VHO fluorescent or metal halide lighting; the expense of which makes its unlikely that you’d purchase so many as to cause a problem. The measured illumination of my tank is 16000 lux [6]. To approach the illumination of the noon sun (100000 lux) I would have to increase the wattage by a factor of six, or supply my tank with a whopping 1800 watts of power!

But would not a tank with these greater light levels be overrun with algae? Algae growth can not be eliminated in tanks with abundant light, but it can be reduced by controlling the concentration of dissolved nutrients in the water. Fish populations must be kept very low, feedings light, and an abundance of algae eating fishes should be present. But nutrients must be supplied to the plant roots, so iron-rich additives (such as laterite) are commonly placed in the gravel [7]. And because actively growing plants can easily strip the water of all the CO2 they require for photosynthesis, CO2 injection is often used as well [8]. And for the real high tech aficionados, one can add “undergravel heating” to keep the substrate healthy and as warm as the water above [9]. All these techniques are intended to provide the plant with the nutrients required to make use of the light, while at the same time denying them to the algae.

So how well does all this work? My own experiences are as follows. My plant tank has moderate CO2 injection, and some laterite in the Sil 9 gravel. I am aware that both the dosage of CO2 and the quantity of laterite are below optimal. And the water, being Calgary tap water, is harder and more alkaline than I would like. The tank receives a chelated iron and potassium fertilizer with every weekly water change of 30%. The tank is filtered by a plant filter that is populated predominately by Nomophila stricta. No substrate heating is used, but the tank bottom is well insulated so heat loss through the bottom should be negligible. As mentioned, the tank has a capacity of 450 liters and the filter has a capacity of 170 liters, and they receive 300W and 220W of fluorescent lighting, respectively. Nitrate, nitrite, and ammonia levels are all immeasurably low with my hobbyist-quality test kits. Algae growth is negligible on the plants, but there is still some algae growing on the glass. Most of the plant species, particularly Ludwigia repens and Valisneria spiralis, are growing exceptionally well, and have to be trimmed regularly. The sword plants (Echinodorus osiris and Echinodorus bleheri) are doing less well, despite a brief flowering soon after they were planted. I attribute their initial growth burst to the ability of the plants to make use of nutrients in their (now exhausted) corms, and the subsequent slow down to a lack of nutrients in the gravel. Hopefully they’ll pick up again as fish detritus builds up in the gravel.

But despite my only qualified success so far, it can be easily seen from Amano’s and the Internet gang’s published photographs that incredible success can be achieved with these high illumination levels when all the other factors are just right.